skip to main | skip to sidebar

It's true: AIDS is nature's awful retribution for our tolerance of immoderate and socially irresponsible sexual behavior. The epidemic is the price of our permissive attitudes toward monogamy, chastity, and other forms of sexual conservatism.

Suppose you walk into a bar and find four potential sex partners. Two are highly promiscuous; the others venture out only once a year. The promiscuous ones are, of course, more likely to be HIV-positive. That gives you a 50-50 chance of finding a relatively safe match.

But suppose all once-a-year revelers could be transformed into twice-a-year revelers. Then, on any given night, you'd run into twice as many of them. Those two promiscuous bar patrons would be outnumbered by four of their more cautious rivals. Your odds of a relatively safe match just went up from 50-50 to four out of six.

That's why increased activity by sexual conservatives can slow down the rate of infection and reduce the prevalence of AIDS. In fact, according to Professor Michael Kremer of MIT's economics department, the spread of AIDS in England could plausibly be retarded if everyone with fewer than about 2.25 partners per year were to take additional partners more frequently. That covers three-quarters of British heterosexuals between the ages of 18 and 45. (Much of this column is inspired by Professor Kremer's research.)

If multiple partnerships save lives, then monogamy can be deadly. Imagine a country where almost all women are monogamous, while all men demand two female partners per year. Under those conditions, a few prostitutes end up servicing all the men. Before long, the prostitutes are infected; they pass the disease to the men; and the men bring it home to their monogamous wives. But if each of those monogamous wives was willing to take on one extramarital partner, the market for prostitution would die out, and the virus, unable to spread fast enough to maintain itself, might die out along with it.

Or consider Joan, who attended a party where she ought to have met the charming and healthy Martin. Unfortunately Fate, through its agents at the Centers for Disease Control, intervened. The morning of the party, Martin ran across one of those CDC-sponsored subway ads touting the virtues of abstinence. Chastened, he decided to stay home. In Martin's absence, Joan hooked up with the equally charming but considerably less prudent Maxwell--and Joan got AIDS. Abstinence can be even deadlier than monogamy.

If those subway ads are more effective against the cautious Martins than against the reckless Maxwells, then they are a threat to the hapless Joans. This is especially so when they displace Calvin Klein ads, which might have put Martin in a more socially beneficent mood.

You might object that even if Martin had dallied with Joan, he would only have freed Maxwell to prey on another equally innocent victim. To this there are two replies. First, we don't know that Maxwell would have found another partner: Without Joan, he might have struck out that night. Second, reducing the rate of HIV transmission is in any event not the only social goal worth pursuing: If it were, we'd outlaw sex entirely. What we really want is to minimize the number of infections resulting from any given number of sexual encounters; the flip side of this observation is that it is desirable to maximize the number of (consensual) sexual encounters leading up to any given number of infections. Even if Martin had failed to deny Maxwell a conquest that evening, and thus failed to slow the epidemic, he could at least have made someone happy.

To an economist, it's clear why people with limited sexual pasts choose to supply too little sex in the present: Their services are underpriced. If sexual conservatives could effectively advertise their histories, HIV-conscious suitors would compete to lavish them with attention. But that doesn't happen, because such conservatives are hard to identify. Insufficiently rewarded for relaxing their standards, they relax their standards insufficiently.

So a socially valuable service is under-rewarded and therefore under-supplied. This is a problem we've experienced before. We face it whenever a producer fails to safeguard the environment.

Extrapolating from their usual response to environmental issues, I assume that liberals will want to attack the problem of excessive sexual restraint through coercive regulation. As a devotee of the price system, I'd prefer to encourage good behavior through an appropriate system of subsidies.

The question is: How do we subsidize Martin's sexual awakening without simultaneously subsidizing Maxwell's ongoing predations? Just paying people to have sex won't work--not with Maxwell around to reap the bulk of the rewards. The key is to subsidize something that is used in conjunction with sex and that Martin values more than Maxwell.

Quite plausibly, that something is condoms. Maxwell knows that he is more likely than Martin to be infected already, and hence probably values condoms less than Martin does. Subsidized condoms could be just the ticket for luring Martin out of his shell without stirring Maxwell to a new frenzy of activity.

As it happens, there is another reason to subsidize condoms: Condom use itself is under-rewarded. When you use one, you are protecting both yourself and your future partners, but you are rewarded (with a lower chance of infection) only for protecting yourself. Your future partners don't know about your past condom use and therefore can't reward it with extravagant courtship. That means you fail to capture the benefits you're conferring, and as a result, condoms are underused.

It is often argued that subsidized (or free) condoms have an upside and a downside: The upside is that they reduce the risk from a given encounter, and the downside is that they encourage more encounters. But it's plausible that in reality, that's not an upside and a downside--it's two upsides. Without the subsidies, people don't use enough condoms, and the sort of people who most value condoms don't have enough sex partners.

All these problems--along with the case for subsidies--would vanish if our sexual pasts could somehow be made visible, so that future partners could reward past prudence and thereby provide appropriate incentives. Perhaps technology can ultimately make that solution feasible. (I envision the pornography of the future: "Her skirt slid to the floor and his gaze came to rest on her thigh, where the imbedded monitor read, 'This site has been accessed 314 times.' ") But until then, the best we can do is to make condoms inexpensive--and get rid of those subway ads.

a. incentives to work

Good for ideas on:

a. Currency wars for 2011-2012 have started early this academic year - protectionism

b. beggar thy neighbour policies

Look for the December lecture by Raj Patel.

a. it's a clear and well thought through lecture

How the Conservatives can help you pass your A level

"At the end of the Parliament, you will be able to use these benchmarks to hold your government to account over whether our economy is more stable, more balanced and more competitive.

We've set them out in detail on our website so you can see exactly what we're proposing. Then, as you have already done with David on our NHS and education policies, you can ask me any question about our plans for economic growth.

You can also vote on any of the questions that have been submitted, so that next week I'll be able to answer the most popular questions in a live webcast."

So, ask George ANY QUESTION about their plans for economic growth....of course you may not get an answer....unless people vote. 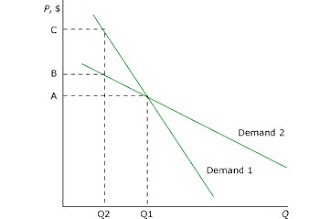 Is it true or false to say that Demand 2 is elastic and Demand 1 is inelastic? 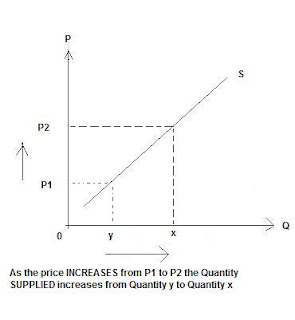 On the left we see a supply curve.

As you can see, the supply curve goes up from left to right.

As the price rises, there will come a time when a lot of firms join the industry. Surely then the supply curve would flatten out?

Also, as production incrases, firms will get economies of scale - so surely the supply curve will shift to the right?