skip to main | skip to sidebar

Round Europe there is a Common External Tariff.

But, hang on, tariffs against EU farmers restrict free trade and therefore are against the greater good...aren't they?

I see Teachers and students have been visiting here - and yet not commenting. Surely the 35+ posts here cannot all be true - because if they are then much of the Economics that is taught in schools is false!
at 13:57 No comments:

The Bank of England should seek to deliberately increase inflation!

The reasoning behind this would be to ensure that there were negative real interest rates.

If the Bank of England commits itself to producing significant inflation then real interest rates could become negative.

Thus people might borrow money (at 0% interest) and repay in their (devalued) pounds.

This would give people a significant incentive to borrow and spend.

A little more inflation might be preferable to rising unemployment or a series of fiscal measures that pile on debt bequeathed to future generations.

The idea of negative interest rates may strike some people as absurd, the concoction of some impractical theorist. Perhaps it is. But remember this: Early mathematicians thought that the idea of negative numbers was absurd. Today, these numbers are commonplace. Even children can be taught that some problems (such as 2x + 6 = 0) have no solution unless you are ready to invoke negative numbers.
at 16:26 1 comment:

* Tax refers to duty, plus VAT

This increases tobacco duty in line with inflation.

The problem is that the cigarettes in my local tobacconist went up by the 7p i.e. the full amount of tax. This means the price rose by ALL the tax.

Does this mean that the demand is perfectly inelastic?

Try drawing the diagram with the price rising by 7p i.e. the full amount of tax.

From Thursday 23 April 2009, alcohol duty rates will increase by 2 per cent above the rate of inflation.

Alcohol duties will increase by 2 per cent above the rate of inflation in each of the next four years.

* Tax refers to duty, plus VAT

Beer in my local went up by 1p - but demand is not perfectly inelastic.

Is the tax diagram rubbish? 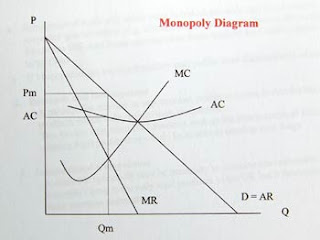 Public goods (You plan to study Economics at University?)

The station should be able to raise approximately the same amount of money if it had 5 listeners or 50,000.

5 listeners will not support a station i.e. they will not give enough.

In perfect competition all the goods cost nothing to produce.

If they cost anything at all then that would be a barrier to entry!

Therefore as they cost nothing to produce all a firm has to do is produce (with no resources) an infinite number of goods and thus make an infinite profit.

If you have two countries, two commodities etc....

If a country has absolute advantage in both products which one do you specialise in?

Obviously the one where the gap between the maximum output of Country A and Country B is the greatest! If you draw it with two straight lines it's where there's the greatest distance.

This will have begative income elasticity of demand.

If the price of the inferior good rises then real income falls.

Thus as per above, more is demanded.

So, the price of inferior godos rises and so does demand. So all retailers who sell cheap and tacky goods have to do is...raise the price!

Now let's deal with some of the comments:

Yes but not everyone. I am referring to the people that do NOT switch!

In addition to that if the price of an inferior good rises it doesn't mean that the real income of all people becomes less. It will become less only for those who buy only that good.

I think the answer could be :

Rise in price of inferior goods will depend on how much demand response to the change in prise, it does not depend on the YED.

The rise in price depends on the reaction of demand?????

"If the price of the inferior good rises then real income falls.

Thus as per above, more is demanded."
Not agree,about inferior goods,we're not considering about the price

Income increases so the demand curve shifts to the right.

One of the factors that affects elasticity is...income.

Therefore if income rises the SLOPE (gradient) of the demand curve changes...to the right.